Golf courses across the country are embracing  native grasses and natural landscapes for roughs and edge plantings.

"Buffalograss (Buchloe dactyloides) is actually the only widely used turfgrass native to North America. Many of the recent cultivars (Sharp’s Improved II, Bowie) grow denser and greener than their predecessors while not sacrificing their drought/cold tolerance, disease resistance, and other great characteristics." - K-State Turfgrass, April 13, 2018

According to two studies at the University of Illinois, a naturalized landscape that incorporates native grasses not only benefits wildlife and natural biodiversity but also saves costs on pesticides and labor for the golf course and can create a course which is just as challenging for golfers.

"One benefit of using native plants is that they are perennial. Because they return year to year, there's no need for reseeding or replanting," said Mechenes. "They have fewer insects or disease problems than some exotics, they are more heat and drought resistant because they evolved in Illinois so they are very well adapted to the environment; they attract wildlife for food and forage for many native species; and also they are attractive and colorful."

He stressed that using native grasses is more economical for golf courses. "Establishing natural areas can reduce water consumption, mowing, pesticide use and labor. It doesn't eliminate them all together, but it can reduce them and golf course managers like to save on costs."

“Golf courses are typically large lots of land, consisting of only green grass,” Cornwell said via email. “This equates to a desert for pollinators because there is so much open space with little foliage to gather nutrients from and few undisturbed areas for pollinators live in. However, utilizing the space to create more habitat for pollinators will help them.” - News Sentinel interview with Indiana superintendent, June 13, 2018 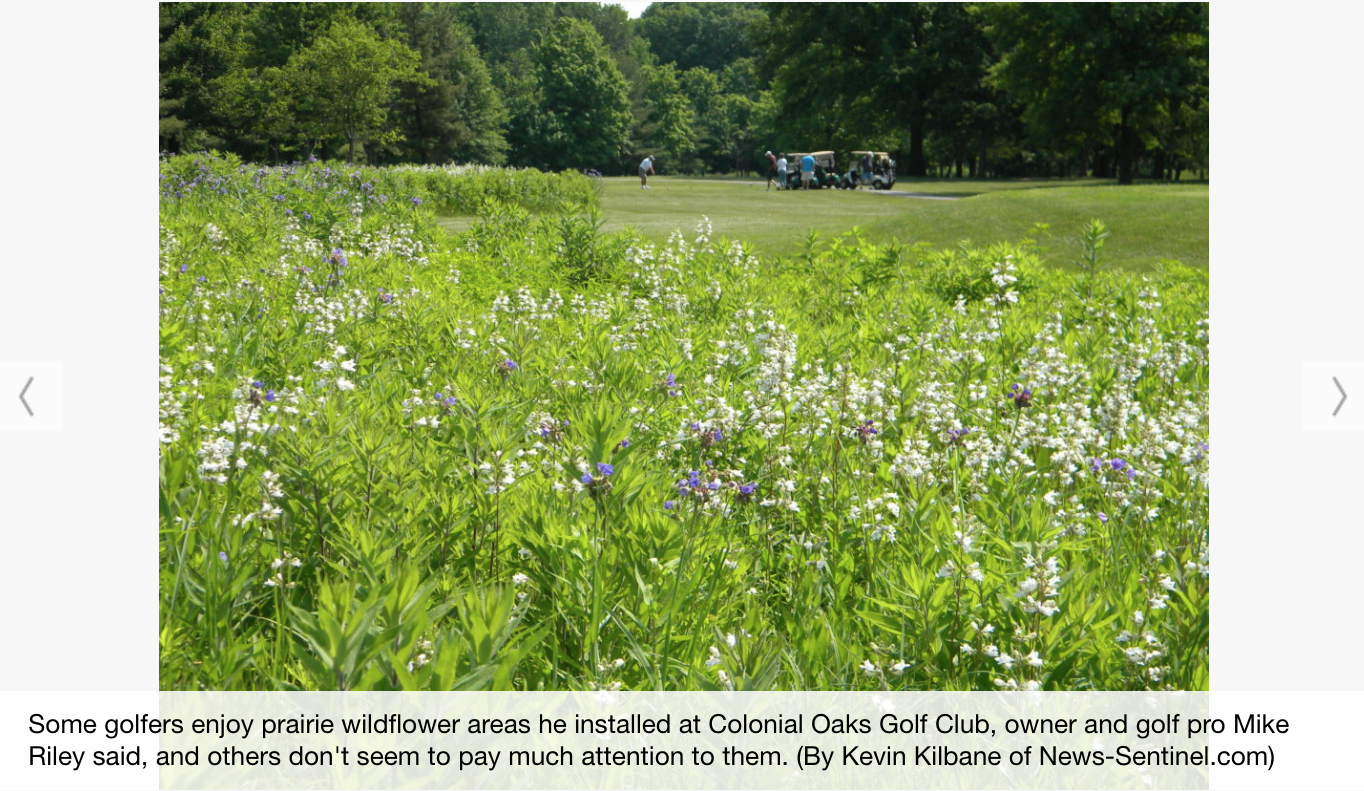 Mechenes' research focused on determining the best choice of native grasses to use on roughs -- the areas on either side of the fairway or green that features slightly taller grass. "Many golf courses don't have any natural areas as roughs so we are trying to encourage them to consider incorporating them into the course landscape in order to make the course more challenging, but also to improve the setting by providing a more natural look rather than a highly manicured non-native setting," he said.

The research examined two warm-season perennial grasses which are native to Illinois -- Blue Grama and the "Cody" variety of Buffalo Grass. "We also used a combination of the two grasses because in previous research done at the University of Illinois it was shown that these two grasses had great promise for use in un-mowed roughs," said Mechenes.

Prairie vegetation planted four years ago through a cooperative venture with the United States Golf Association, the Ladybird Johnson Wildlife Center and Baylor University ecologists has thrived as a wildlife haven while also creating maintenance efficiencies for the Waco, Texas municipal course. While Course Superintendent J.D. Franz was concerned in the first years of the project, he now says things are “looking good,” as “each area [has] seemed to develop its own ecosystem.” - C&RB News, July 10th 2018

Once a week, Mechenes went out to visually inspect the plots and rate them by percent of coverage. The plots had minor irrigation needs and were mowed and applied with herbicide to reduce weed invasion. The first study was planted in the 2006 growing season and was repeated in June 2007. Mechenes said that the study in 2006 didn't receive a pre-emergent herbicide application and consequently had a lot of weed competition. The study in 2007 received a treatment of the herbicide Plateau and was much taller, greener, healthier-looking grass.

Some of the varieties had a hard time getting started but by the end of the growing season, but most had excellent coverage of 80 percent or more. 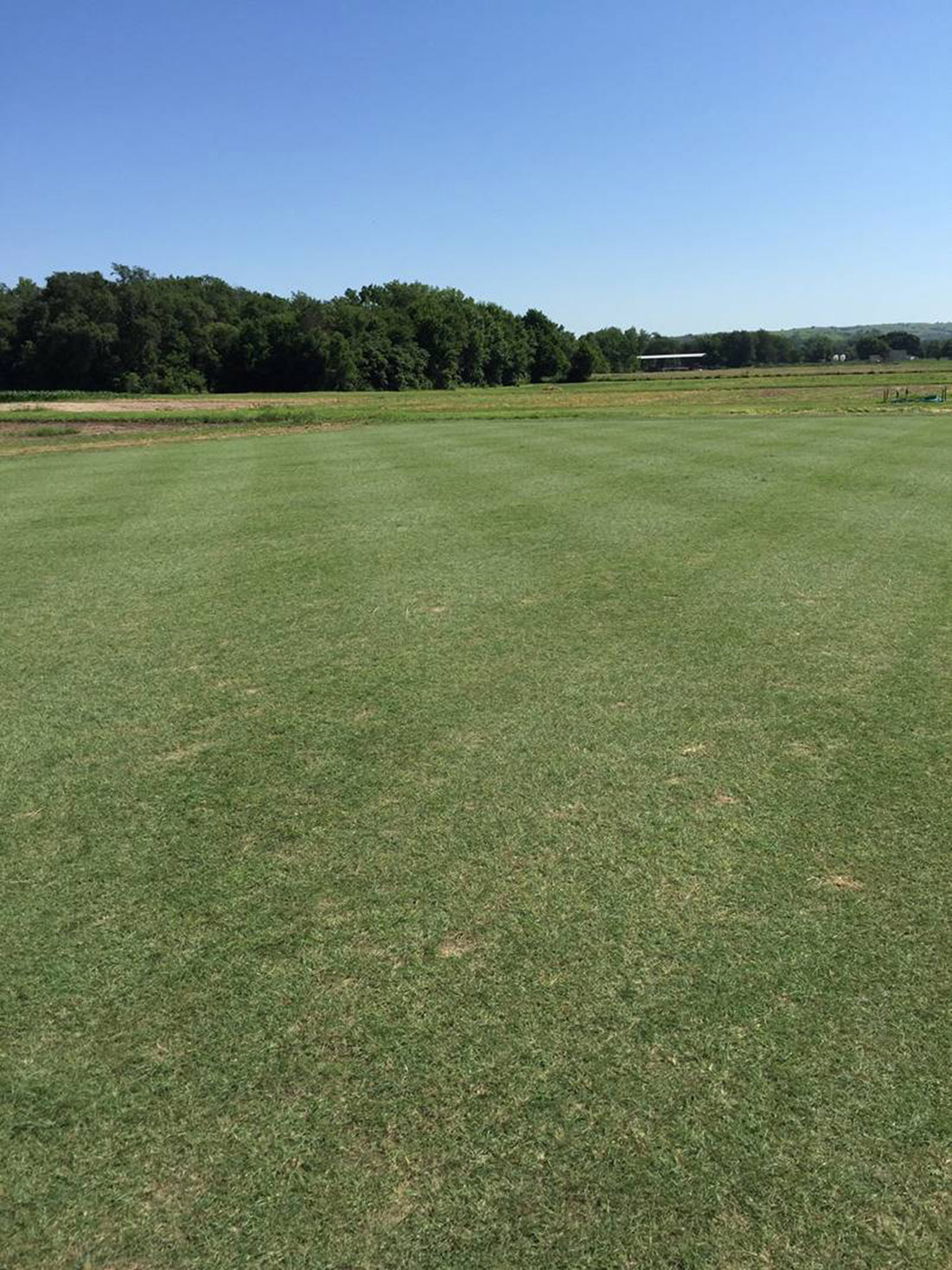 The goal of the second study was to find out which seeding rate provided the best cover using four different seeding rates--10, 20, 25, and 30 pounds of seed per acre--and then repeated five times in each plot. .

"The results showed that  Blue Grama and "Cody" Buffalo Grass had the best coverage – thick and beautiful -- and that the plots using 30 pounds of seed per acre established quicker but by the end of the study there was no difference in the coverage between the 20 and 30 pounds. So, the recommendation is to use 20 pounds of seed per acre because it's less seed, which costs less and uses less labor to plant," said Mechenes.

Some other advantages to planting native grasses Mechenes mentioned were that they solve some site problems such as areas that have erosion problems which native plants are more adapted to; and, it may be a public relations advantage when golf courses invite school children or scouting groups to come out and observe the natural wildlife, because the native grasses attract more birds and butterflies.

Mechenes did cite a couple of disadvantages. "You're obviously on a golf course, so slow play is an issue as sometimes these grasses grow very tall making it difficult to find your ball. And native grasses sometimes attract nuisance animals such as deer and rabbits that get in the way as well as bees, flies and mosquitoes."

Source: University of Illinois at Urbana-Champaign