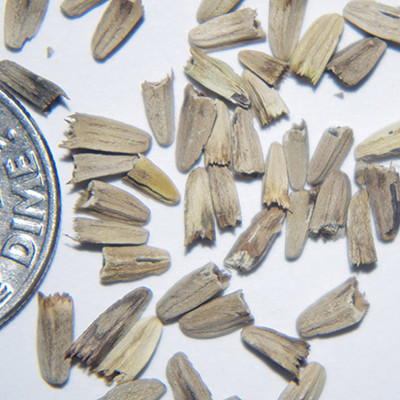 Sunflower family (Asteraceae). Purple coneflower is a perennial herb with a woody taproot. The plant has one to several rough-hairy stems, mostly unbranched. Leaves are alternate, simple, and narrowly lanceshaped. Flowers look like lavender sunflowers at the ends of long stalks. Flowers bloom from June to July. Spreading or drooping, light pink to pale purple. The disk flowers are 5-lobed, brownish-purple, and situated among stiff bracts. Pollen grains are yellow. Fruits are small, dark, 4- angled achenes.

The purple coneflower grows in open rocky prairies and plains. It is found primarily in the Great Plains, east of the Rocky Mountains from Texas to Montana and Saskatchewan, to eastern Oklahoma, western Iowa, and western Minnesota. For current distribution, please consult the Plant Profile page for this species on the PLANTS Web site.

Herbivores such as insects and deer are not a problem with Echinacea. Gophers and moles can be a problem, eating the roots. Goldfinches love the Echinacea seed crop and can clear out all the seed in a few days.

The purple coneflower, Echinacea angustifolia, was and still is the most widely used medicinal plant of the Plains Indians (Kindscher 1992). It was used as a painkiller and for a variety of ailments, including toothache, coughs, colds, sore throats, and snake bite. Echinacea angustifolia was used as an analgesic by the Cheyenne, the Dakota, the Fox, and the Winnebago (Moerman 1986). Purple coneflower is used as an antidote for poisonous conditions, snake bite, and other poisonous bites by the Winnebago, Ponca, Pawnee, Omaha, Dakota, and by most Montana tribes (Gilmore 1977). The root was used to relieve toothache by the Dakota, Omaha, Pawnee, Ponca, Teton Sioux, and Winnebago (Moerman 1986). The Cheyenne chewed the root to stimulate the flow of saliva, which was especially useful for Sun Dance participants as a thirst preventative (Hart 1981). A wash was used as a dressing for burns to relieve pain by the Dakota, Winnebago, Omaha, Pawnee, and Ponca.

The Fox used purple coneflower as an anticonvulsive and gastro-intestinal aid. The Kiowa chewed coneflower root for coughs and sore throats. The Omaha and Pawnee used a smoke treatment as a remedy for headache. A poultice of smashed roots were applied as an anesthetic to arms and hands by the Omaha, and a poultice was applied to enlarged glands as a treatment for diseases such as mumps by the Pawnee, Ponca, Dakota, and Winnebago. Purple coneflower was used to increase endurance in the sweat lodge ceremony by the Dakota, Pawnee, Ponca, and Winnebago. The Lakota ate the root and green fruit when they were thirsty or perspiring (Rogers 1980, Munson 1981). The Teton Sioux used coneflower to cure tonsillitis. The Omaha and Ponca used the plant as eyewash. When the roots were mixed with blazing star (Mentzelia laevicaulis) and boiled, the resulting tea was drunk for smallpox (Kindscher 1992). Purple coneflower roots mixed with puffball (Lycoperdon species) spores and skunk oil were used in the treatment of boils. The smoke from burning purple coneflower was used as a treatment for distemper in horses by the Ponca, Dakota, Pawnee, and Winnebago.

The Omaha, the Lakota, and the Ponca sometimes used the seed heads to comb their hair (Kindscher 1992). Purple coneflower stalks were used in play by Pawnee children. They would whirl two flower stalks one around the other, the two stalk touching by the flower heads.

The purple coneflower was the only native prairie plant popularized as a medicine by folk practitioners and doctors, and was used extensively as a folk remedy (Kindscher 1992). The use of the purple coneflower root was used by early settlers in Oklahoma as an aid in nearly every kind of sickness. If a cow or a horse did not eat well, people administered Echinacea in its feed.

Echinacea is widely used as an herbal remedy today, primarily as an immuno-stimulant. Echinacea angustifolia root was found to possess mild antibiotic activity against Streptococcus and Staphyloccus aureus (Stoll et al. 1950). A pentane-oil extracted from the root was found to be inhibitory to Walker carcinosarcoma 256 and P-388 lymphocytic leukemia (Voaden and Jacobson 1972). Italian investigators found the wound-healing effects of Echinacea to be attributable to echinacin B (Bonadea et al. 1971). Perhaps the most important finding so far is the discovery of large, highly active polysaccharide molecules in E. angustifolia that possess immunostimulatory properties (Wagner and Proksch 1985, Wagner et al. 1985). Stimulation of the immune system appears to be strongly influenced by dose level. Recent pharmacological studies indicate that a 10-mg/kg daily dose of the polysaccharide over a ten-day period is effective as an immuno-stimulant. Increases in the daily dosage beyond this level, however, resulted in “markedly decreased pharmacological activity” (Wagner and Proksch 1985, Wagner et al. 1985). Other research has shown that the purple coneflower produces an antiinflammatory effect and has therapeutic value in urology, gynecology, internal medicine, and dermatology (Wagner and Proksch 1985).

Echinacea angustifolia also contains chemical compounds that are insecticidal. One such compound is toxic to mosquitoes and houseflies; another substance, echinolone, disrupts insect development (Hartzell 1947, Jacobson 1954, Voaden and Jacobson 1972). Researchers in the Horticulture Department of South Dakota State University are currently attempting to identify the Echinacea angustifolia germplasm containing the highest level of echinolone. It will be used in manufacturing and insecticide for sunflower crops (Foster 1991).

Ornamental: The purple coneflower is often grown simply for its ornamental value, especially for its showy flowers. The best possibility for obtaining a new cultivar is in the hybrids between Echinacea purpurea and Echinacea angustifolia var. angustifolia, whose progeny are compact, rounded, and bushy plants about two feet in diameter (Mc Gregor 1968). Information via USDA NRCS Plant Guide

Sold by PLS pounds Clasping coneflower is an annual herb with elongated, bluish, waxy leaves that generally clasp around the stem at the base. The flower heads are similar to those of black-eyed...

Purple Coneflower (Echinacea purpurea) is an easy-to-grow favorite with lots of rosy purple flowers with non-drooping petals around a brown cone-shaped seed head. Easy to establish in...