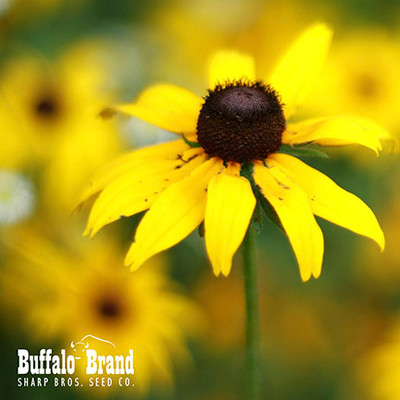 Black-eyed Susan, is a biennial forb about 1 m tall with yellow ray flowers and dark brown spherical centers. After germination, the seedling grows into a rosette with oblong leaves. Sometimes flower stalks will appear in the first summer, but typically black-eyed Susan blooms from June to September of the second year. After flowering and seed maturation, the plants die. The seed is very small (1,746,000 per pound) and black, about 2 mm long and 0.5 mm in diameter.

Erosion control: Black-eyed Susan is an important component in critical area treatment plantings along with grasses, legumes, and other forbs when used along road cuts, hillsides, and other areas subject to erosion.

Wildlife: This plant offers protection and food to several song and game birds.

Recreation and beautification: Black-eyed Susan can be used for landscaping and in wildflower gardens.

Black-eyed Susan is easily established with most critical area seeding techniques. Generally ½ lb. of seed per acre is sufficient in mixes with conservation grasses, legumes, and other forbs. Where the intent is to maximize the impact of the forb component, utilize bunchgrasses rather than aggressively spreading grasses such as reed canarygrass or bromegrass. Once established, new seedlings will be produced from the preceding crop; the stand may perpetuate itself indefinitely.

After establishment, competing perennial vegetation should be controlled through the use of mechanical or chemical practices. If competing vegetation is not controlled, one will observe a decrease in the number of black-eyed Susan plants.

Indian Blanketflower is an annual forb that produces coralla red to reddish purple ray petals with a touch of yellow on the tips, during May-Sept. It is the state wildflower of Okalhoma and grows in...

Showy Partridge Pea Chamaecrista fasciculata is an annual erect legume plant that reaches a height of 1 to 3 feet. The leaves consist of 10 to 16 pairs of small, narrow leaflets that are somewhat...