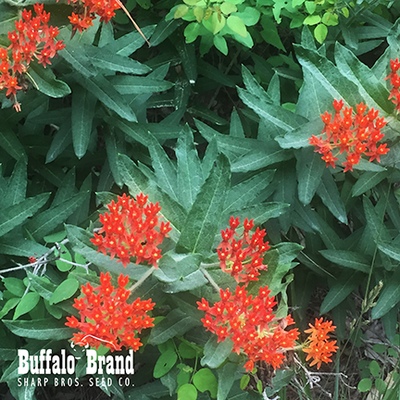 The species name, tuberosa, means full of swellings or knobs, referring to the enlarged root system." Butterfly milkweed stems are hairy, erect, and grow in numerous clumps. There is a watery sap within the stems and leaves. The leaves are alternate, simple, crowded, lance-shaped, 5-10 cm long, shiny green, smooth above and velvety beneath. The flowers are in showy, rounded to flat-topped groups near the ends of branches. Each flower has 5 petals, bent downward, orange to red or sometimes yellow, topped by a crown of 5 erect hoods, each one containing a short horn. Fruits are hairy, spindle-shaped pods 8-15 cm long. The numerous seeds each have a tuft of long white hairs at the tip.

Ethnobotanic: Milkweed has been used for fiber, food, and medicine by people all over the United States and southern Canada. Fibers from the stems of milkweed have been identified in prehistoric textiles in the Pueblo region. Tewa-speaking people of the Rio Grande still make string and rope from these fibers. At the Zuni Pueblo, the silky seed fibers are spun on a hand-held wooden spindle and made into yarn and woven into fabric, especially for dancers. Pueblo people ate green milkweed pods and uncooked roots from one of the species that forms fleshy tubers underground.

Milkweeds supply tough fibers for making cords and ropes, and for weaving a coarse cloth. Milkweed stems are collected after the stalks senesce in late fall to early winter. The dried stalks are split open to release the fibers. Milkweed fibers are sometimes mixed with fibers of Indian-hemp (Apocynum cannabinum). The bark is removed and the fibers released by first rubbing between the hands and then drawing the fibers over a hard surface. The cord is formed by twisting the fiber opposite each other and twining them together. Often this is accomplished by rolling the fibers on the thigh, while twisting them together. The young shoots, stems, flower buds, immature fruits, and roots of butterfly milkweed were boiled and eaten as a vegetable by various indigenous groups of eastern and mid-western America. Butterfly milkweed has many medicinal uses. The Omahas and Poncas ate the raw root of the butterfly milkweed for bronchial and pulmonary troubles. Butterfly milkweed root was also chewed and placed on wounds, or dried, pulverized, and blown into wounds. The Omaha tribe used butterfly milkweed medicine for rites belonging to the Shell Society. The Dakotas used the butterfly milkweed as an emetic. The Menominis considered the butterfly milkweed, which they called the "deceiver," one of their most important medicines.

Generalized medicinal uses for milkweed species include 1) its use in a salve for scrofulous swelling, 2) as a diarrhea medicine, 3) drunk by mothers unable to produce milk, 4) medicine for snow blindness and other forms of blindness, 5) relief of sore throat, 6) applied chewed root for swelling and rashes, 7) to expel tapeworm, 8) to treat colic, 9) to act as contraceptives, and 10) to cure snakebite.

European Americans used Asclepias tuberosa, called "pleurisy root", to relieve inflammation of the lining of the lungs and thorax, and to relieve bronchial and pulmonary trouble. Pleurisy root is a stimulant to the vagus nerve, producing perspiration, expectoration, and bronchial dilation. As its name signifies, it is useful for pleurisy and mild pulmonary edema, increasing fluid circulation, cilia function, and lymphatic drainage. The root of the butterfly milkweed, was officially listed in the U.S. Pharmacopoeia from 1820 to 1905 and in the National Formulary from 1916 to 1936.

Milkweed species, as a group, are known to contain cardiac glycosides that are poisonous both to humans and to livestock, as well as other substances that may account for their medicinal effect. Resinoids, glycosides, and a small amount of alkaloids are present in all parts of the plant. Symptoms of poisoning by the cardiac glycosides include dullness, weakness, bloating, inability to stand or walk, high body temperature, rapid and weak pulse, difficulty breathing, dilated pupils, spasms, and coma.

The cardiac glycoside in milkweed has also been useful as a chemical defense for monarch butterflies (Danaus plexippus). Chemicals from the milkweed plant make the monarch caterpillar's flesh distasteful to most predators. Monarch butterflies are specific to milkweed plants. This is the only type of plant on which the eggs are laid and the larvae will feed and mature into a chrysalis. Eggs are laid on the underside of young healthy leaves. Monarch, Queen, and Viceroy butterflies are Müllerian mimics, all are toxic, and have co-evolved similar warning patterns to avoid predation.

Wildlife: Milkweed species are attractive to many insect species, including the large milkweed bug, common milkweed bug, red milkweed beetle, blue milkweed beetle, and bees. Accordingly, this is a wonderful horticultural plant for landscaping to attract butterflies (particularly monarchs), whose numbers are declining and migratory routes changing due to lack of appropriate habitat. Butterfly milkweed also has strikingly beautiful flowers. Caution: At one time, milkweed was classified as a noxious weed due to reported toxic effects on livestock, and efforts were made to eradicate it. Milkweeds are thought to be poisonous to cows and sheep. Milkweed also can have invasive characteristics in disturbed areas.

Butterfly milkweed is easily propagated by both seed and rhizome cuttings. Both seedlings and cuttings will usually bloom in their second year, although cuttings will occasionally bloom during their first year. Seeds and plants of selected cultivars are available from many nurseries. When the roots of the butterfly milkweed were more commonly harvested for their medicinal use, the plants were dug when dormant in the late fall. Butterfly milkweed increases by underground shoots and can be invasive. It is ideal in semi-dry places where it can spread without presenting problems for other ornamental species.

Indian Blanketflower is an annual forb that produces coralla red to reddish purple ray petals with a touch of yellow on the tips, during May-Sept. It is the state wildflower of Okalhoma and grows in...

Sold by the PLS pound Cowgirl's Delight wildflower mix is a blend of native wildflowers designed to provide blooms through the seasons. Beautiful way to provide food sources for wildlife and...