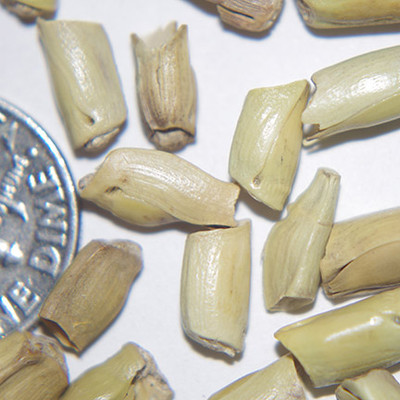 Eastern Gamagrass (Tripsacum Dactyloides) is a native perennial bunchgrass and a distant relative of corn. It is a long-lived (to 50 years), warm-season species native to most of the eastern half of the United States. It ranges in height from 4 to 8 feet. The leaf blades are flat, long (12 to 30 inches) and wide (0.4 to 1.2 inches), with a well-defined midrib. It reproduces vegetatively from thick, knotty, rhizome-like structures called proaxes. The spikes are 6 to 10 inches long and are made up of one to several spikes. Similar to corn, eastern gamagrass has separate male and female flowers (monoecious). But unlike corn, each gamagrass spike contains both male and female flowers. Male flowers occupy the top three-fourths of the spike and female flowers the bottom one-fourth.

Seed is produced from June to September, resulting in uneven maturation.