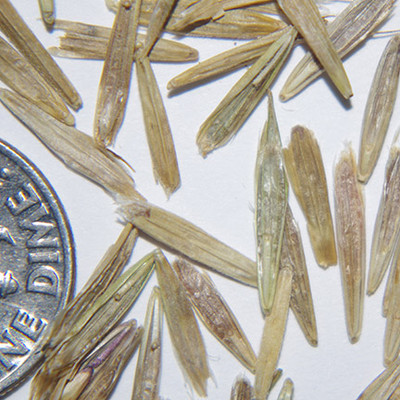 Meadow Brome (Bromus biebersteinii) is a little known, cool-season grass that is native to southwestern Asia. Original seeds were collected in Turkey in 1949, and further study was conducted at the Plant Introduction Station in Ames, Iowa. It was released for production in 1966 by the Idaho and Washington Agriculture Experiment Stations. It is classified as a rapid-developing long-lived grass for sub-humid and irrigated areas.

Regar is a long-lived, rapid-developing leafy forage plant that spreads by short rhizomes. The seed germinates readily to produce strong seeding, which rapidly develop.few seeds are produced the first year of establishment. Seed yields are highest the year after establishment, and afterwards amounts decline rapidly. Regar rapidly recovers after mowing or grazing. Regar was released from the Plant Materials Center in Aberdeen, Idaho. Its usage is becoming widespread in the western United States.

Management of Meadow Bromegrass is similar to that of other cool-season grass. When planting good seed to soil contact is essential. The seeds are larger than Smooth Bromegrass.

New seedlings should not be grazed until the plants are fully established. Leave a 6 inch stubble to maintain plant vigor and to provide a barrier against too close grazing. Allow plants to make 10-12 inch growth each spring prior to grazing and allow 3-4 weeks of regrowth between each grazing.

Sold by the PLS pound Orchardgrass (Dactylis glomerata) is a cool season introduced perennial bunchgrass. Plants are 20-48 inches. It is one of the earliest grasses to initiate growth in the spring...