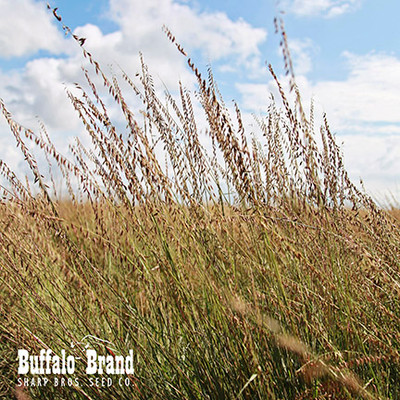 Sideoats Grama is a native, warm-season, bunch forming or sod forming perennial grass. Distributed over much of the Midwest and Great Plains, it is an important grass of the prairie and plains states. It grows on well-drained uplands, ridges and rocky areas, but also may be found on soils ranging from deep to shallow. Sideoats Grama does not do well on soils that are too wet or too sandy. It grows in association with Bluestems, and develops a thick, dense vegetation.

Butte is a winter hardy, long lived, relatively early maturing variety. Its best growth is during the long days of summer and the seeds mature as early as mid-August.

El Reno produces strong leafy plants that are excellent for forage. It grows rapidly and is noted for its disease resistance and winter hardiness.

Haskell is adapted to most of Texas. It reproduces by rhizomes as well as seed, is drought tolerant, shows good vigor, and is resistant to seed shattering. Field planting data showed Haskell to be the best and most consistent forage producing variety of Side-Oats Grama for central and southern Texas. Haskell is limited only by moisture, requiring at least 18” annually.

Kildeer is recommended for use in pasture and range seedings in the Northern Great Plains. It was released by the SCS in Bismark, ND and it grows best on well-drained uplands, shallow ridges and rocky areas of varying soil types.

Niner is one of the most important varieties of Side-Oats Grama of the southwestern US due to its high palatability and vigorous growth. It is recommended for use in seed mixes with other species for range reseeding, roadside plantings or mined-land reclamation. Best performance comes on medium to heavy textured soils.

Pierre is another variety whose growth is vigorous, leafy and relatively disease free. It grows well on poor soils and in areas of low annual precipitation. This variety grows well in South Dakota and adjoining states.

Trailway is a winter hardy, long-lived, late maturing variety. It requires most of the growing season to produce mature seeds and may fail to produce seed crops in regions with shorter season. It is recommended for upland planting in eastern and southern Nebraska.

Vaughn plants are recognized by an upright leaf structure and its bunch-type growth patter. It is easily established, has good seedling vigor, and is highly drought tolerant. Vaughn is used in eastern Colorado and New Mexico.

Native is a variety suitable for domestication. It is sometimes used as an ornamental. Native is not as winter hardy as some varieties by does produce a palatable forage for livestock and good wildlife cover. It demonstrates good seedling vigor compared to other native grasses.

Proper ground preparation is one of the most important consideration when native grasses are being established. The seed bed should be firm but not solid; cultivation to kill the roots of cool-season grasses is essential. Planting can be done by either drilling or broadcasting, and the seed should be covered with no more than one fourth inch of soil.  Avoid planting the seed too deep. Test the soil for deficiencies and apply needed phosphorus, potassium or lime prior to seeding. No additional fertilization is required after the stand has been established. Once the stand is well established, regulate the grazing patterns to avoid over-grazing. This should be particular note toward the end of the growing season as grass grazed too closely weakens the root structure which holds the food supply through winter. Competing woody shrubs, undesirable weds and extensive mulch build-up can be managed by a controlled burn done in the late winter before the vegetation has begun its spring growth. Always check with an expert in grass management, such as our personnel at Sharp Brothers Seed Company before attempting such a burn for advice as to the proper technique to be used. Our personnel are trained to listen to your needs, help develop your program for planting and suggest suitable varieties for your location. With planning the preparation, your stand of Side-Oats Grama will supply you with dependable, warm-season forage crop for years to come.