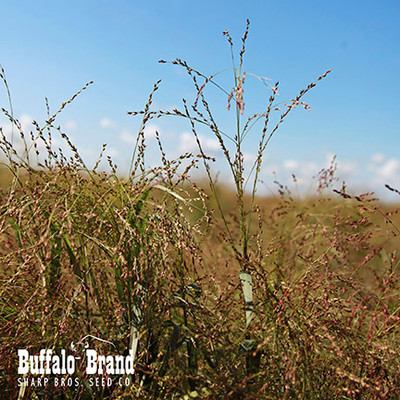 Switchgrass is a native, perennial, warm-season, sod-forming tall grass. It is most commonly found in prairie lowlands, but will grow under wide range of climatic conditions. A thick stand of Switchgrass makes excellent winter and early spring wildlife cover because of its ability to remain in an upright position when covered with snow or ice. Many farmers prefer Switchgrass to other varieties of native grasses because of the hard seed coat that easily feeds through conventional seeders. A drought-resistant grass, it even produces well in the driest years. During the dry summer of 1988, a Missouri producer reported his Cave-in-Rock Switchgrass hayed in mid-July yielded 6000 pounds per acre, compared to fescue hayed in late May which produced barely 1000 pounds per acre.

Alamo was developed in Texas. The foliage is coarser than some varieties and often reaches 10 feet in height. Its late maturity date insures production into the early fall.

Blackwell is a variety that produces lush foliage longer into the growing season, and is disease resistant Heavy vigorous routs and stems make it excellent for conservation use.

Cave-in-Rock originated in Illinois. It is a top choice among all the Switchgrass varieties because of its palatability and disease resistance. Cave-in-Rock Switchgrass is noted for its adaptability to the growing conditions found in the more eastern states, especially the high humidity areas. It grows best in years of average rainfall and temperature. Plants often reach over 5 feet at maturity. Late maturing, it grows best on fertile, well drained soils.

Kanlow is especially well suited to poorly drained sites or areas subject to periodic flooding, but also performs well on upland soils. Young plants are succulent and are readily grazed by livestock.

Nebraska 28 is a particularly well adapted grass for the Sandhills of Nebraska or similar types of soils and conditions.

Shelter originated in New York and is used primarily for wildlife plantings and highway rights of way. It is durable and demonstrates great stability

Trailblazer is a variety of Switchgrass tat refines the finest quality of Pathfinder and adds an even greater degree of winter strength. Northern states with a harsh climate find this variety particularly suitable for their needs. It is a much more palatable Switchgrass than Pathfinder.

As with all warm season grasses, good soil to seed contact is essential. A firm moist seed bed that has been tested for deficiencies of the soil with applications made to correct these deficiencies is the basis for the grass crop. Switch grass should not be grazed or hayed below the 6 inch height and the hay harvesting should not be scheduled too late in the growing season (approximately August 15). Switchgrass may benefit from a controlled burn every 3 to 5 years to eliminate residue and mulch build up. If you choose to fertilize, avoid high rates of nitrogen. Allow 6 to 8 inches of stubble to remain through the winter to provide insulation for the root system, assuring a healthy vigorous growth the following spring.