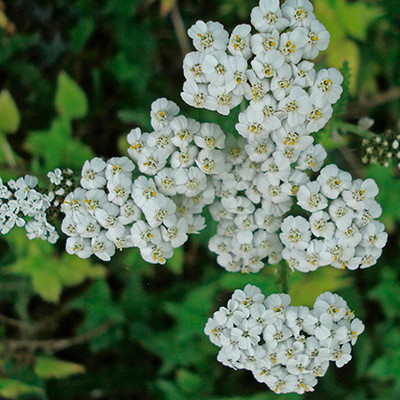 Common yarrow is a perennial herb that produces one to several stems (8 to 16 inches tall) from a fibrous underground horizontal rootstock (rhizome). It is known to be both native and introduced. Leaves are evenly distributed along the stem, with the leaves near the middle and bottom of the stem being the largest. The leaves have varying degrees of hairiness (pubescence). Leaf blades are lance-shaped in outline, but are finely divided. Overall leaf dimensions range from ¼ to 1¼ inch wide by 1¼ to 6 inches long. The flower heads (inflorescence) have a flattened dome shape (with approximately 10-20 ray flowers. The flowers are whitish to yellowish-white. The plant commonly persists from May through June. Adaptation and Distribution Common yarrow is frequently found in the mildly disturbed soil of grasslands and open forests. Common yarrow occurs throughout the United States.

Common yarrow is a drought tolerant species of which there are several different ornamental cultivars. Plant the seeds no more than ¼ inch deep; they require light for germination. The seeds also require a temperature range of 65-75 degrees Fahrenheit.

Common yarrow responds best to soil that is poorly developed and well drained. The plant has a relatively short life. To prolong the life of the plant, divide the plant every other year and plant 12-18 inches apart. Common yarrow is a weedy species and can become invasive. Proper care should be used to control the spread of the plant from its desired growing location.

Common yarrow may suffer from mildew or root rot if not planted in well-drained soil.

White heath aster is a hardy perennial with an extensive root system of rhizomes and stolons. This bushy plant grows to be 0.5 to 1 m tall and can have a 30 cm spread. Leaves are narrow (1cm wide)...