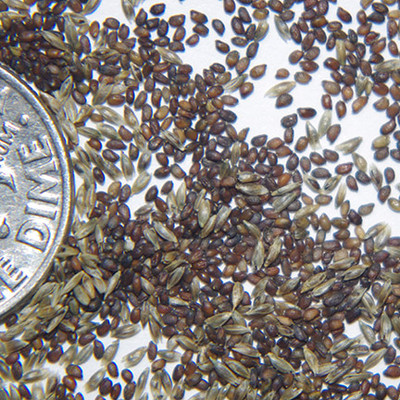 Alkali Sacaton wis a native perennial large bunchgrass found in the western half of the U.S. Grows up to 20-60 inches tall, and found in nonsaline coarse, medium, and fine textures soils. After established, it is tolerant of drought and water inundation, but it is intolerant of shade and is found growing in open areas. Bloom periods vary by region: April-May in the southwest, June-October in the Great Plains, and July-August in the Northwest.

Livestock: Alkali sacaton is good forage for horses and cattle in the far western United States in arid or semiarid regions.
Wildlife: This plant is a source of food for deer, small mammals (it is relished by jackrabbits), birds (game and non game), and waterfowl.
Conservation: Alkali sacaton is frequently utilized for seeding and stabilizing disturbed areas. Due to its salt tolerance, it is recommended for seeding saline sites such as oil well pits and saline waste from power generating plants.
Landscaping: A mass planting of this species could create a contrast to coarser foliaged plants.

Proper ground preparation is one of the most important considerations when native grasses are being established. The seed bed should be firm, but not solid. Cultivation to kill the roots of cool-season grasses is essential. Planting can be done by either drilling or broadcasting, and the seed should be covered with no more than ¼ inch of soil. Avoid planting the seed too deep. Test the soil for deficiencies, and apply needed phosphorus, potassium, or lime prior to seeding. No additional fertilization is required after the stand has been established. Once your stand is well established, regulate the grazing patterns to avoid over-grazing. Much consideration should be given to controlled grazing toward the end of the growing season; grass grazed too closely weakens the root structure which provides a storage system for food reserves. Without these reserves of food the plant will die or be extremely stressed, thereby delaying or diminishing the spring “green up”.

The grass is tolderant of moderate grazing and a good forage producer. It has the ability to efficiently use extra water during forage production. Alkali sacaton is tolerant of fire; however, it can be killed if the fire is severe. Fire recovery has been reported from 2 to 4 years.