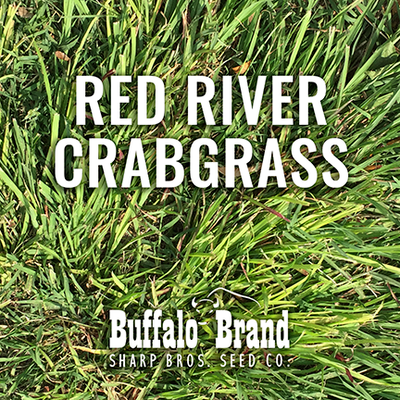 Quick and Big crabgrass is the newest variety of crabgrass available, having been selected for early germination, less seed dormancy, superior seedling vigor, outstanding grazing/tonnage potential. Red River/Dah's Big River crabgrass, the first crabgrass variety to be released, was developed for improved forage production and has been proven to out yield naturalized crabgrass. Crabgrass is used for grazing and occasionally dry hay production. Although it is an annual, it is frequently managed as a perennial by allowing it to produce some seed each season in order to produce a volunteer crop the next year. It is best suited for multi-year forage programs since carryover seed could be undesirable in ground devoted to grain production.

Forage quality of crabgrass is good, regrowth after clipping is good. Though it is grown on a variety of soil textures, crabgrass is best adapted to sandy soils. Crabgrass seed does not meter effectively through standard agricultural drills. Though a variety of planting methods are effective, crabgrass is frequently planted by mixing seed with fertilizer and broadcasting the mix in the winter or spring months over wheat that is being grazed. Hoof traffic can improve seed to soil contact.

Crabgrass germination is somewhat erratic; starting at minimum soil temperature of 60 degrees; and is suitable for grazing approximately 4 weeks after germination. Producers should be advised that establishment of a dense, highly productive stand of crabgrass after first planting can be unpredictable. Consequently the grazing capacity of first year crabgrass is unreliable. In subsequent years stand establishment is more predictable; primarily because of the large seed bank that develops as crabgrass frequently 50 to 200 pounds of seed per acre. To help insure adequate first year forage production, producers should overseed crabgrass seedings with 10 to 12 pounds of Grazex BMR per acre with a grain drill when soil temperatures reach 60 degrees.

This low population planting of sorghum sudangrass will contribute greatly to forage production while allowing sufficient sunlight to penetrate the canopy so that crabgrass can develop. Grazex BMR is highly palatable, similar to crabgrass. Producers report that animals graze both forages uniformly which allows prolific crabgrass seed production. If mechanically incorporated, crabgrass seed should not be placed deeper than ½ inch. Planting rate of 5 to 6 pounds per acre in most environments where adapted. Western Dryland 10-12 lbs/acre Eastern Dryland/ Irrigated 15-25 lbs/acre.

Teff grass is primarily used for multiple cuttings of dry hay. It is usually planted alone, over seeded into thin alfalfa stands or cool season perennial grass to boost summer hay production. It...