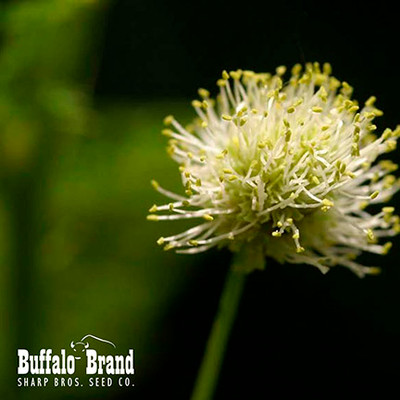 This species is a member of the legume family (Fabaceae). It is a warm season, herbaceous, perennial leguminous forb. Multiple stems grow from a woody caudex which is in turn attached to the deep tap root system of this species. The erect stems are smooth, angular, and grooved. The plant stands 1.5 to 4.25 feet tall when mature. Its doubly compound leaves are attached to the stems in an alternate arrangement. Leaves are sensitive to external stimulation such as sunlight or touch which causes the leaflets to fold inward, thus giving the plant the common name false sensitive plant. The white flowers contain five sepals, petals and stamens and are borne in “powder puff” globose heads. The self pollinated flowers produce clustered flat scytheshaped pods each about 1 to 1 1/2 inches long and containing two to six seeds. The pods generally split open at maturity and the brown seeds are expelled or at least in a position to be scattered by wind or wildlife.

Illinois bundleflower plants are most often found in prairie remnants, sloughs, woodland edges or disturbed areas. The plant thrives on medium textured soils and is tolerant of most soil types except heavy clays and exceptionally coarse sands. It grows more vigorously and is more abundant in a 20 inch or greater rainfall zone. Good drought tolerance can be expected in open communities with reduced levels of competition. Bundleflower is normally found growing in association with tall warm-season grasses.

It is easily established from commercially available seed. Bundleflower may be seeded alone at a depth of ½ inch on heavier moister soils or up to 1 inch deep on dryer sandier soil types. Planting into a prepared seed bed with mulch would increase the chance of establishment. Planting in the early to mid spring time would provide optimum moisture conditions for the seedlings. Broadcast planting would require a 50 to 100 percent increase in the amount of seed used. To maximize germination a seed scarification process should be preformed on the seed prior to planting. The seed should also be inoculated with the correct inoculant to cause nodulation of the plants root system.

Planting a mixture of legumes and grass will generally increase the crude protein concentration of the harvested forage. However, forage samples containing Illinois bundleflower showed lower dry matter digestibility than grass samples alone. This lowering of digestibility may be due to the tannin content of the legume or its high lignin content. Forage yields produced in Minnesota indicated bundleflower may be a viable mid-summer forage candidate in that state, but winter survival might be a concern.

Rabbits, rodents, grasshoppers, and leafhoppers selectively attack legumes, especially at the seedling stage of growth. Reports indicate that fungal leaf spot diseases and seed eating insects are a problem with this species.

Violet prairie clover is a native, warm-season legume which grows to a height of 30 to 90 cm. Several stems may grow from a single base. The flowers are pinkish-purple on elongated spikes which are...

Showy Partridge Pea Chamaecrista fasciculata is an annual erect legume plant that reaches a height of 1 to 3 feet. The leaves consist of 10 to 16 pairs of small, narrow leaflets that are somewhat...

Violet prairie clover is a native, warm-season legume which grows to a height of 30 to 90 cm. Several stems may grow from a single base. The flowers are pinkish-purple on elongated spikes which are...

Maximilian sunflower, is a tall, warm season, spreading, perennial forb which is a member of the true sunflower family. Large, showy, yellow blooms occur throughout the full 5ÛÔ7 feet...