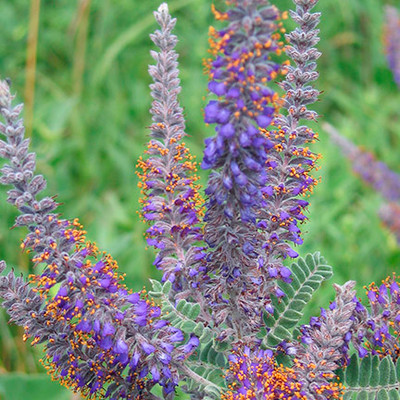 Leadplant is a subshrub to herbaceous perennial with multiple stems that can get to about 3 ft tall. Leaves are odd-pinnately compound and covered in dense lead-colored silver-gray hairs (giving the plant its common name). Purple flowers have one petal and are along the top parts of some of the stems. The stamens are orange in color and when found extend out past the petal. The fruits are small pods that contain one seed, which is smooth and brown.

Leadplant can occur in soils that are somewhat acidic to alkaline and can tolerate some salinity. It is resistant to occurrences of fire and can tolerate a moderate amount of grazing. Leadplant is a good indicator of well managed lands that have moderate to low levels of livestock grazing. Leadplant is native to areas in Manitoba and Ontario. In the U.S. it occurs from Montana east to Michigan, and south to New Mexico and Louisiana. For updated distribution, please consult the Plant Profile page for this species on the PLANTS Web site.

Ethnobotanic: Many Native American tribes used leadplant in many ways. Most made a tea from the leaves and drank the tea, sometimes as a medicine to treat ailments such as pinworms, eczema, rheumatism, neuralgia, open wounds, and cuts. Some tribes made a substance to smoke from leadplant leaves and buffalo fat. Some believed that it could be used to make a “medicine” to attract buffalo to the person that had it on their clothing. Some tribes named the plant “buffalo bellows” because the timing of flowering coincided with the time of the year that the buffalo were in rut and bellowing.

Landscaping and restoration: Leadplant is an ideal ornamental species because it has showy flowers, is drought tolerant, and shade tolerant. It also forms nodules on its roots to fix nitrogen and can be used for prairie restorations.

Wildlife and livestock: It is a floral food resource for pollinating insects, including solitary bees. It is very palatable to livestock and wildlife, including cattle, sheep, horses, elk, and deer.

Prepare a firm, weed-free seedbed and plant pods separately or in rows that alternate with grasses. Seed should be inoculated prior to seeding. Seed should be planted 1/4 in. to 3/16 in. deep in the spring or fall, depending on stratification requirements. For full stands of leadplant a seeding rate of 20 to 30 pure live seed (PLS) per square foot is needed. For seeding in grass or grass forb mixtures use a seeding rate of 0.5 to 1 PLS per acre. Seed will need to be stratified. Methods for stratification of seed are to sow seeds in the fall and let them stratify over winter or soak in 180-200è_F (82-93è_C) water for 12 hours then moist chill seed at 41è_F (5è_C) for 30 days. Germination will be between 14 and 20 days after planting. Leadplant can also be propagated by greenwood or hardwood cuttings. Transplanting success is generally poor in prairie restorations.

Initially grazing should be withheld and weeds controlled by mowing above seedlings during establishment period. Graze or mow conservatively and periodically graze only after dormancy to sustain cover and high production improvement, leaving tall stubble. The presence of leadplant on native rangeland is usually indicative of a well managed area.

Common pests of leadplant are grasshoppers, leafhoppers, and small mammals. Leaf spots, rusts, downy mildew, and Cytospora amorphae have been found on leadplant but they are not considered major diseases.