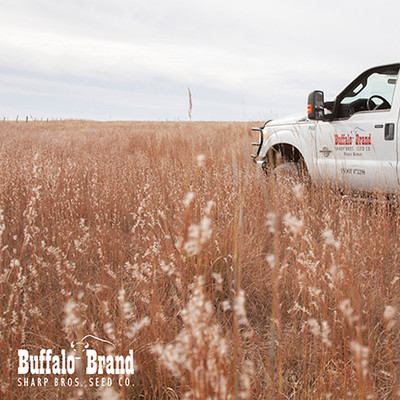 Little Bluestem is a valuable summer forage grass in drier areas because of its efficient use of whatever moisture is available. Once established, Little Bluestem requires very little maintenance. Whenever grazing is properly managed, plantings of native Little Bluestem adapt well and form high quality pastures.

Little Bluestem is a very common native grass, found in almost all states of the United States. A smaller grass than Big Bluestem, it is slightly less palatable, but more drought resistant. A bunch-forming grass, Little Bluestem has a dense root system which enables it to grow on even the poorest and roughest ground. The stem and growth from previous years remain standing where it weathers to create a mulch. Growing best on medium or dry soils, new shoots are identifiable in early April and maturity is reached by late August to October. Little Bluestem is highly desirable for grazing and haying.

Blaze was developed initially as an ornamental grass. Turning a brilliant red in the fall after the first frost, Blaze Little Bluestem catches the eye of many who are interested in colorful landscaping. Blaze retains the good qualities of Little Bluestem: good forage and well adapted to most locations. Several states are now using Blaze Little Bluestem for roadway seeding after new construction is complete.

Camper is a long-lived perennial grass, producing maximum vegetative growth in midsummer. It is recommended primarily in mixture with other warm-season prairie grasses for range, non-irrigated pastures, and roadside plantings.

Cimarron was developed after the combining of several strains of native Little Bluestems from Southwest Kansas. Well suited for drier climates and lighter soils, Cimarron is planted in southern Kansas, across Oklahoma and into Texas with strong, highly productive stands resulting.

At Sharp Bros. Seed Co. we have worked with a variety of customers over many years who have successfully seeded and established native grass species. These species demonstrate amazing tenacity once they are established. Natives are tolerant to extremes of heat or cold, drought and a variety of other harsh environmental conditions. Seed and seedling characteristics of natives are different from those of most domesticated crops or turf grasses.

There is an apparent correlation between the intensity of a plant's summer blue-green color and its fall red-orange color.