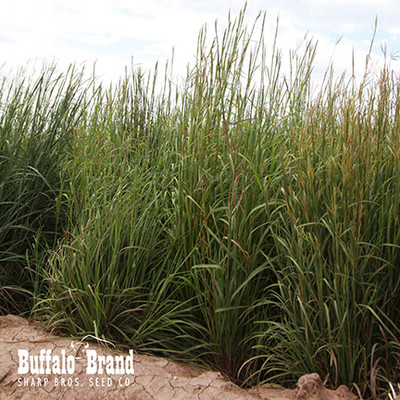 Sand Bluestem, Andropogon hallii is a native, warm-season perennial tall grass. It forms a dense sod in the sandy soils in which it is normally found. Growth begins in April with maturity reached in October. It is fairly palatable to livestock, but will not tolerate close grazing. Sand Bluestem prefers the drier climates, so the largest native stands are in the western parts of the Great Plains, north to Canada, and south to Texas.

Chet utilized for forage production in the warm summer months. At five test locations in Oklahoma, Texas, and Kansas average forage dry matter yield was 5,700 pounds per acre an 8.8 percent greater yield than ‘Woodward’ sand bluestem at these same test sites. The seasonal average crude protein and in vitro digestible dry matter were not significantly different from Woodward in these field trials. The species is also found in conservation plantings especially on sandy areas where it performs well in preventing soil erosion and dune formation. Wildlife habitat and forage production are important qualities of Chet sand bluestem. Upland song birds eat the seeds and its upright growth habit provides nesting habitat for birds and small mammals. With the increased popularity of low input, low maintenance landscaping, sand bluestem has grown in use as an accent or unique focus plant in some home flower displays. Derived from a collection of big bluestem (Andropogon gerardii Vitman) and sand bluestem that consisted of 158 accessions received as seed from the USDA-ARS North Central Regional Plant Introduction Station in 1985. The collection was assembled by the late Dr. Kling Anderson, Kansas State University, Manhattan, Kansas. Chet went through three cycles of phenotypic mass selection for growth, re-growth, disease resistance, and leafiness. Plant selections in subsequent cycles focused on seedling vigor and seed size to some extent and also on selection for a medium stature population. Seed from the third cycle of selection was called population ‘AB medium,’ which was subsequently released as Chet sand bluestem in 2004.

Goldstrike is a forage grass variety developed by the Nebraska Agricultural Experiment Station. It is a long-lived, perennial variety, that gives maximum production in the mid-summer. It shows its best growth on sandy or loamy soil. Used for roadside plantings, Goldstrike rates high in soil stabilization ability.

Woodward is a variety found to be superior to native plants in flower production, seed setting and leafiness. It is considered to be of superior quality in seed production.

The usual management practices for warm-season grasses apply to Sand Bluestem. The seed needs to be conditioned in order to be seeded in common grassland. The seed bed should be firm and moist for good seed to soil contact. Soil deficiencies should be determined by a soil test, and quality seeds from a reputable distributor such as SHARP BROS. SEED CO. should be utilized. After the stand has been established, grazing should be closely watched in order to protect the stand. If it is grazed closer than the 6 to 8 inch level during the growing season, Sand Bluestem will decrease in dominance, and be replaced by less desirable plants. If soil nutrients are lacking, lime, phosphorus, etc. should be applied before the planting. A stubble of some length must remain after the razing season to protect the roots during the winter in order to insure healthy regrowth the following spring.

Sold by the PLS pound Sand dropseed is a long-lived perennial warm season bunchgrass, native throughout North America. Sand dropseed is extremely drought tolerant and is adapted to sites...