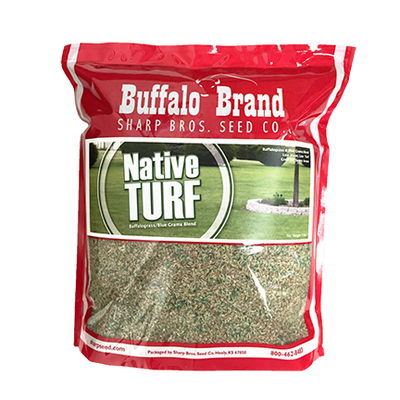 SOLD OUT for the Season

A blend of 2 parts primed buffalograss seed with 1 part of blue grama seed. These two species have similar leaf appearance and commonly grow intermingled in nature. Adapted to all soil textures, the Native Turf blend is particularly useful on sandy soils where it tends to produce a better turf than does buffalograss alone.  Both species exhibit outstanding drought, heat and cold tolerance and are broadly adapted.

SEEDBED PREP & SEED PLACEMENT: Control weeds prior to planting. This reduces the weed seed population and allows soil moisture to accumulate. The longer the period of weed control, the greater the benefit to buffalograss establishment.

Do not be overly concerned with following an exact procedure to plant buffalograss. The goal is to place the seed no deeper than 1/4 to 1/2 an inch into a firm seedbed. Your footprints should not sink in deeper than 1/4 inch when the seeding is completed. This result can be achieved using a variety of methods Following are a few suggestions:

Large Areas: Use native grass drill that is outfitted with depth control bands.

Small Areas: Loosen the soil surface prior to planting. Remember that seed is to be placed no more than 1/4 to 1/2 inch deep. There is no need to loosen the soil surface deeper than 1 inch in most cases. Broadcast the seed by hand or with an easy flow fertilizer spreader. Stir the see into the soil with a rake or light implement. Firm the seedbed with a roller or cultipacker. Small areas can firms with foot traffic.

PLANTING TIME: Ideal planting time is determined by availability of irrigation. Where irrigation is not possible the best seeding dates are April through May, allowing the seed to be soaked by spring rains. Germination will occur as the soil warms, frequently after mid May in the central plains. Non-irrigated plantings can be sucessful later into the summer by usually do not have germination conditions as good as spring plantings.

Where irrigation is available, the ideal planting date is late May thorugh early June. After planitng keep the 'seed zone' 1/4 inch below the soil surface moist. The surface can be allowed to dry between waterings. Planting after August 15, is not advisable.

MANAGEMENT: Weed control the first year of establishment can be achieved by mowing. The seelings are too tender the first year to handle chemicals. Many weed species are tall and will shade over buffalograss. Set the mower to remove as much weed growth and as little buffalograss as possible, 1 to 3 inch mowing heights frequently work well during the establishment period. Don't allow weeds to get taller than 6 inhces if possible. Once the buffalograss turf is established the mower should be set at 2-3 inches. Lower mowing heights encourage weed growth and reduce drought tolerance. Buffalograss usually requires much less mowing than other lawn grasses.

Premium Tall Fescue & Bluegrass Blend Emerald Sport is a residential and sport turf mix combining the strengths of tall fescue with the ability of bluegrass to mend divots...

OUT OF STOCK FOR THE SEASON! Please check out our other available buffalograss options.    Buffalograss is a soft textured, fine leafed sod forming warm season grass which has endured for...