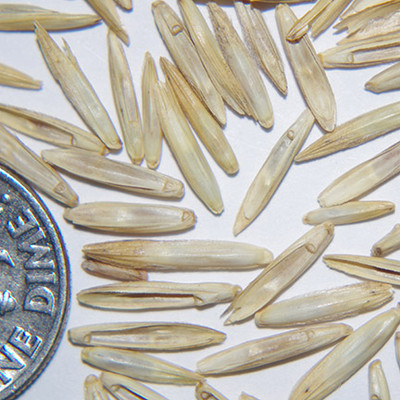 Pubescent Wheatgrass is an introduced species of Wheatgrass, brought into the United States from Eurasia in 1934. It is a long-lived, sod-forming, cool-season grass that is closely related to Intermediate Wheatgrass, but is more drought tolerant and winter-hardy. Because of a dense covering of hairs it is sometimes called “ stiff-hair wheatgrass”. The plants spread by rhizomes and may reach a height of 3 to 4 feet. Pubescent Wheatgrass is adapted to a wide range of precipitation, temperature, and elevation, and good stands on rangeland retard the invasion of sagebrush and rabbitbrush.

Erosion control/reclamation: Due to its spread by rhizomes, pubescent wheatgrass is well adapted to stabilization of disturbed soils. It can be used in critical and urban areas where irrigation water is limited and to stabilize ditch banks, dikes, and roadsides.

Wildlife: Un-grazed strips of this grass provide good nesting cover for game birds and migratory waterfowl. These strips may also be left when swathing pubescent wheatgrass for hay.

Pubescent Wheatgrass is primarily used for permanent seedings on rangeland and for waterways on farmland. It performs best on well drained, slightly acid, neutral, or even mildly alkaline soils. Pubescent Wheatgrass can be used for wildlife plantings as it provides dense nesting cover, early spring green-up, and stands well during winter months. Pubescent Wheatgrass has been primarily used in the intermountain and northern Great Plains on sites about 3,500 feet in elevation and the annual precipitation is above 12 inches. If seeded at lower elevation, more moisture is required. Pubescent Wheatgrass establishes quickly but produces forage that is somewhat less palatable than other wheatgrass. It is a disease free grass but is subject to injury by the Banks grass mite. Applications of sulfur effectively control these mites.

Meadow Brome (Bromus biebersteinii) is a little known, cool-season grass that is native to southwestern Asia. Original seeds were collected in Turkey in 1949, and further study was conducted at the...