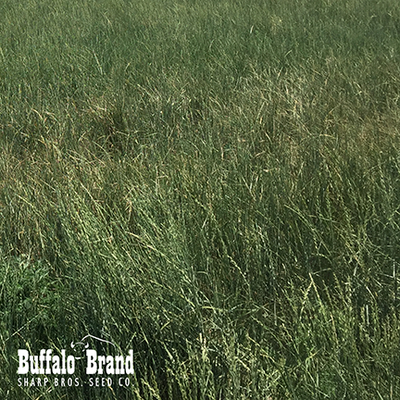 Western Wheatgrass is a native, cool-season, perennial, sod-forming grass. It reaches a height of 1 to 3 feet, and because of its bluish-colored stems and leaves, it is often called “bluestem wheatgrass” or “blue joint”.  Western Wheatgrass is a tenacious, dry range type of native grass. It is considered to be a comparatively harsh grass which makes good spring grazing for several weeks before it becomes stemmy and unpalatable. Cattle and other livestock like it and do well on it. Western Wheatgrass seasons well and produces good hay.

Western Wheatgrass is saline or alkaline tolerant, but does not do well on light, dry sand. It grows best in areas that receive between 14 to 35 inches of precipitation yearly. It occurs most frequently on moderately fine textured soils in low areas where runoff water has pooled and salts have accumulated. It is also found on well drained upland sites and will grow through thick layers of silt. Western Wheatgrass will tolerate short periods of flooding and also endure long periods of drought.

Western Wheatgrass is moderately productive, fairly nutritious grass that is considered to be a good value as summer and winter forage for livestock. It is also utilized by some species of ruminant wildlife. The primary uses of Western Wheatgrass have been in erosion control, where it is used to seed waterways, terraces, and streambanks, and also range revegetation. Its vigorous, sod-forming habits, plus its silt tolerance make it valuable for these purposes. Reclamation areas are often seeded with Western Wheatgrass, with its popularity growing as its outstanding qualities are recognized.

Grazing on Western Wheatgrass should be on a rotation system. Heavy grazing will be tolerated, but production will be lowered considerably by this practice. It cures well and can be used for winter forage. Western Wheatgrass can grow in pure sands, but more often is found mixed with other grasses.

Arriba is a cool-season, seed forming, perennial grass. It occurs naturally on loam to clay soils at elevations from 3,500 to 10,500 feet.

Barton was developed cooperatively by the Kansas Agricultural Experiment Station and the Soil Conservation Service. Originating from a field collection made by Sharp Bros. Seed Co. it is a plant which forms rhizomes and also a leafy growth for forage. It can be used for pasture, hay and range seedings, alone or in mixtures with other grasses. It has also been used for conservation planting.

Rosanna was developed in Montana and Wyoming. Seedling vigor makes Rosana valuable for mine spoils reclamation. Adapted to areas of 12 or more inches of precipitation, it does well on the rolling hills of the northern slopes of the Rocky Mountains.

Native is a cool-season, sod-forming grass that is widely used for pastures and hay. It is excellent for erosion control, but is slow to develop from seed. Native Western Wheatgrass is drought resistant and moderately tolerant to an alkaline soil.