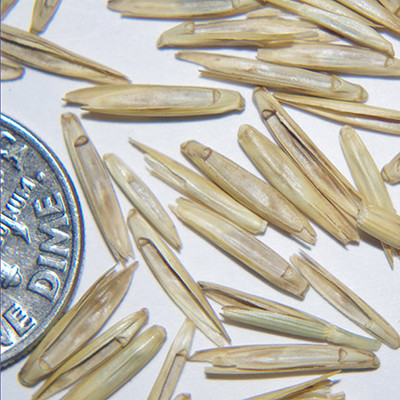 Tall Wheatgrass (agropyron elongatum) is an introduced wheatgrass, brought into the United States from Turkey and the U.S.S.R. it is a tall, vigorous, cool-season, bunch-grass that is the latest maturing grass adapted to the continental climatic areas of the Western United States. Tall Wheatgrass is especially tolerant of saline and alkali soils and high yields are obtained even to elevations of 7,500 feet. Plants mature late in the season, producing a large seed that is easily planted. On strong alkali or under drought conditions, leaves become a darker blue-green, but with adequate moisture and fertility, growth will begin early and continue into the late summer.

Alkar is recommended for use in the Pacific Northwest. It is the most widely used cultivar in the intermountain region. Because of its late maturity, it requires season-long water to produce. It has been used to reclaim saline and alkali waste.

Jose is a somewhat less coarse and earlier maturing variety than other Tall Wheatgrass cultivars.

On saline soils, saltgrass should be eliminated, good drainage provided, and the salts leached or flushed off. Stands are best established in good seedbeds with deep furrow drill in early spring. The seedlings are slow to establish and light irrigation at 2 to 3 day intervals in the furrows is required until seedlings are 4 to 6 inches tall. With surface irrigation, salts from the soil accumulate on the ridges, allowing the seeds in the bottom of the furrow to sprout and grow. Continuous irrigation reduces salt concentration. Planting without irrigation is possible if adequate precipitation occurs. On less salty soils, Tall Wheatgrass is often planted with alfalfa in alternate rows.

Seedlings require one full season of protection before grazing use, two seasons of dry sites. Tall wheatgrass fields should be fenced from other fields to get good utilization. When more palatable species are available, Tall Wheatgrass will only be sparsely utilized. When new growth is 8 to 10 inches high, spring grazing can begin. When plants start to head, pastures should be clipped back to an 8 inch stubble.

Tall Wheatgrass production will drop rapidly from year to year unless a high level of soil nitrogen is present. The usual rater is 40 to 80 pounds/acre as determined by a soil test. Nitrogen additions will greatly increase production and the amount of cover.