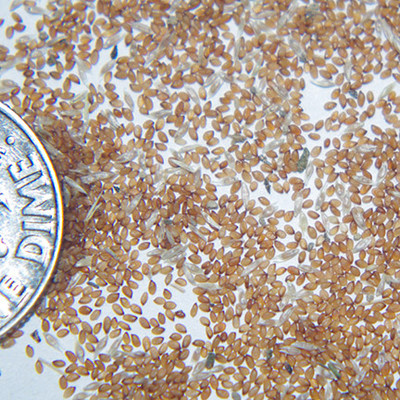 Sand dropseed is a long-lived perennial warm season bunchgrass, native throughout North America. Sand dropseed is extremely drought tolerant and is adapted to sites receiving 7 to 16 inches annual precipitation.  During periods of summer drought the leaves roll up to reduce surface area and evapotranspiration (Wan et al. 1993). It is considered to be one of the most drought resistant species in short-grass prairie. Sand dropseed is most common at lower elevations in sandy soils but can also be found on coarse soils at upper elevations to 8,000 ft.  It is adapted to slightly acidic to slightly basic soils and has a salt tolerance.

Erosion control/rehabilitation of disturbed areas: Sand dropseed is widely used in disturbed area plantings in the Southwest, Intermountain West and short-grass prairies of the Great Plains. The fibrous root system effectively stabilizes sand dunes and hills. Its abundant seed production makes it a pioneer plant in disturbed areas and an invader of sandy soils. It has also been noted as an early native colonizer in sites suffering from water stress.

Sand dropseed seed has been used to make bread and porridge by Apache, Hopi and Navajo tribes. The plant has also been used to create a cold infusion that is applied to sores and bruises on the legs of horses (Vestal, 1952).

The usual management practices for warm-season grasses apply to Sand Dropseed. In some areas, sand dropseed requires overwintering or scarification for successful germination. The seed coat is very hard and impermeable. Seed lots frequently contain up to 50% hard seed; however, the seed can retain high levels of viability for many years under proper seed storage conditions.

For rangeland plantings, use 0.5 to 1.0 lbs pure live seed (PLS)/ac for solid stands. Drill or broadcast seed onto the surface to 1/8 inch depth into lightly prepared sandy and fine soils. Seed can be planted slightly deeper into coarse soils. Follow seeding with a light harrowing or cultipacking. Establishment is dependent upon spring and summer soil moisture. Sand dropseed seedlings have low vigor, but once established the plants are able to withstand severe summer drought periods. Due to slow development, grazing should be deferred for at least two years to ensure good establishment (USDA).

This species spreads naturally from seed once established and increases on depleted rangelands and wastelands . Sand dropseed plants are able to withstand heavy use due to their protected root crown, late maturity and because they are less preferred than other species. However, plants can be killed by overgrazing as a result of continued close cropping. When grazed properly, sand dropseed increases on poor condition, low seral ecological sites (USDA). Content from USDA Plant Guide